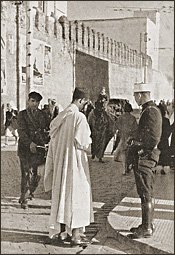 Morocco has a far more interesting history than the relatively few historical novels available in English about the country might suggest. Phoenician traders arrived and settled on its shores by the sixth century B.C. Later, the country was known as Mauretania and was independent, ruled by Berber kings, until after the fall of its neighbor, Carthage, when Rome began to dominate parts of the country.

The first historical novels set in Mauretania portray the period when the Roman Emperor Augustus arranged the marriage of King Juba II with a daughter of Cleopatra, cementing an alliance with Rome. The Romans lost influence in the third century when Berber tribes began to reconquer parts of Mauretania. The Vandals conquered northern Africa, including Mauretania, in the fifth century; in the sixth, Belisarius and Justinian restored Roman rule; in the seventh, conquests by the Visigoths ended Roman control over all but a small outpost, conquered by the Berbers in the eighth century. 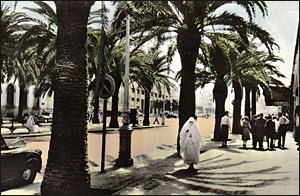 A series of Berber and Arabic dynasties ruled Morocco for centuries. Historical novels emerge again for the sixteenth and seventeenth centuries, when it was an Islamic nation ruled by sultans. European influence increased in the nineteenth century, and in 1912 the Treaty of Fez made Morocco a French protectorate.

The Tuareg tribes, nomadic horsemen often known as the "blue men" because of their indigo head-wraps, have captured more than one author's imagination. Native Moroccans long resented colonial rule, and the popular Sultan Mohammed V finally negotiated a return to independence during the 1950s. Political tensions in the 1960s did not prevent the newly independent country from becoming an exotic tourist destination for young Americans. Readers interested in Morocco are fortunate that several authors, undazzled by romance, have taken a serious literary approach to portraying the country and its people.

The Ancient Kingdom of Mauretania

(1974), about a disgraced centurion's efforts to rescue the kidnapped daughter of a legate while Augustus is ailing and the Empire's future is in doubt. Our review

Stephanie Dray, Song of the Nile (2011), about Cleopatra's daughter Selene and her marriage to King Juba of Mauretania; sequel to Lily of the Nile. Revew at the Smart Bitches Trashy Books blog


The Era of the Sultans 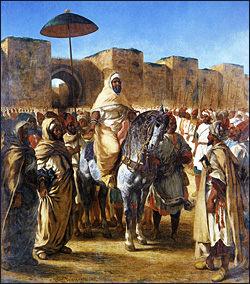 (2012), about a scribe framed for murder and a captive Englishwoman in the palace of a Moroccan sultan. Review at the She Reads Novels blog

(2010; titled The Tenth Gift in the U.S.), about a young Cornishwoman kidnapped by Barbary pirates to be sold as a slave in seventeenth-century Morocco and the modern London woman who discovers her diary. Review at The Independent

Amin Maalouf, Leo Africanus (1986), about a sixteenth century Moroccan geographer and his travels through the Mediterranean world. Review at The Guardian 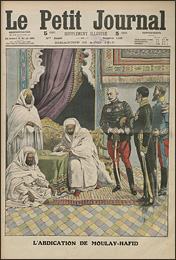 
Tahar ben Jelloun, The Sand Child (1985), about a Moroccan man in the early twentieth century who raises his eighth daughter as a boy so that she will be able to inherit his estate. Review at New Arab Review

Tahar ben Jelloun, The Sacred Night (1987), about a Moroccan woman raised as a boy and her search for her identity as a woman; sequel to The Sand Child; winner of the 1987 Prix Goncourt. Review at the Los Angeles Times

Linda Holeman, The Saffron Gate (2009) about an American woman who goes to Marrakesh in the 1930s in search of her missing lover. Review at the Historical Novel Society

(1980 in the original French; first English translation 2009), alternating stories about a young Tuareg man in the early twentieth century and a modern-day girl of Tuareg descent who flees to France to avoid an unwanted marriage; the author was awarded the 2008 Nobel Prize for Literature. Review at the New York Times

Michael Pearce, A Dead Man in Tangier (2007), a mystery about a Scotland Yard inspector sent to Tangier on the eve of World War I to investigate the death of a Frenchman; #4 in the Seymour of Special Branch mystery series. Review at Mysterious Reviews 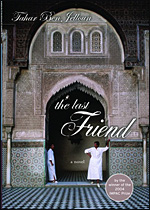 
Tahar ben Jelloun, The Last Friend (2004), about two young men who meet in Tangier in the 1950s and live through political turmoil and imprisonment. Review at The Observer

Esther Freud, Hideous Kinky (1992), about a five-year-old London girl whose hippie mother takes her and her sister to Marrakesh in 1972; a semi-autobiographical novel based on the author's childhood. Review at the Los Angeles Times


Laila Lalami, Hope and Other Dangerous Pursuits (2005), about a group of young Moroccans who try to cross to Spain on a lifeboat. Review at blogcritics.org

(2012), a critically acclaimed novel about an English couple who cause an accident on their way to a party in the Moroccan mountains. Review at the New York Times

Back to Travel by Novel Directory