HistoricalNovels.info interviews
the author of Illuminations 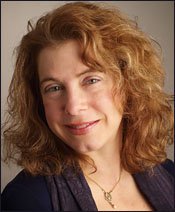 It was great to have author Mary Sharratt join us on October 12, 2012, to talk about her novel Illuminations. Welcome, Mary!

How did you first discover Hildegard of Bingen's story?

For twelve years I lived in Germany where Hildegard has long been enshrined as a cultural icon, admired by secular and spiritual people alike. Catholics there nurtured her cult as a "popular" saint long before she was finally canonized in May 2012, while Lutherans revere this fiery powerfrau as a prophet of the Reformation. Naturopathic doctors still practice Hildegard's system of holistic healing, which includes herbal treatments believed to prevent cancer, while Hildegardian cookbooks interpret her dietary advice for a modern audience.

Have you explored some of the places where Hildegard lived?

In 2009, I made an extensive research tour to all the locations mentioned in the novel, from the ruins of Disibodenberg Monastery where Hildegard languished in the anchorage, to the site of Rupertsberg, the monastic house she founded for her nuns when life at Disibodenberg had become unbearable. Unfortunately Rupertsberg was completely destroyed in the Thirty Years War, but the location is very beautiful and inspiring. You can see photos on my blog.

What do you think makes Hildegard still so fascinating to modern readers?

Her story arc is incredible. When she was a helpless eight-year-old, her parents gave her as a tithe to the Church and she was walled up in an anchorage with the fourteen-year-old ascetic, Jutta von Sponheim, whose fanatical mortification of the flesh eventually killed her. A lesser soul than Hildegard might have gone mad, but instead she nurtured her visions which allowed her to break free from her prison.

What she accomplished in her life was truly amazing. She wrote nine books; founded two monasteries; went on four preaching tours; composed 77 highly original sacred songs and Ordo Virtutum, a liturgical drama set to music; and wrote over 400 letters, many of them to monarchs and popes. She triumphed against impossible odds to become the greatest voice of her age.

I believe Hildegard's legacy remains hugely important for contemporary women, who, even in the twenty-first century, are condemned to stand at the margins of established religion. The Church of Hildegard's day could not have been more patriarchal and repressive. Yet Hildegard's re-visioning of religion celebrated women and nature and even perceived God as feminine, as Mother. Her vision of the universe was an egg inside the womb of God.

Hildegard shows us how visionary women might transform the most male-dominated faith traditions from within.

Review of Illuminations by Mary Sharratt

See listing for Illuminations at Amazon.com