HistoricalNovels.info interviews
the author of A Gift for the Magus 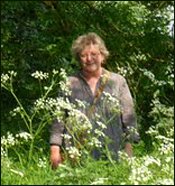 Linda Proud visited the blog November 13, 2012, to talk about her novel A Gift for the Magus.

You've written about the world of Lorenzo de' Medici and Botticelli in your Botticelli Trilogy. What inspired you to move backward in time to write about Lorenzo's grandfather Cosimo and the painter and Carmelite friar Fra Filippo Lippi?

During the thirty years it took to write the trilogy, I didn’t make any plans as to what to do next. When I’d finished, I was stumped for an idea until someone suggested a novel about Cosimo. I warmed to that idea but didn’t want to write fictional biography. Then I remembered the story of Filippo Lippi, an errant painter for whom Cosimo was a loyal patron and wise mentor. I had covered Fra Filippo’s story in A Tabernacle for the Sun, because his son – yes, son – was the best friend of the protagonist. Filippino was rather proud of being born of a friar and a nun and it was a great story. Suddenly I was engaged. It made perfect sense to expand this cameo into a novel, a prequel.

Lippi struggled to be paid fairly for his work, as artists still struggle today. What other parallels do you see between Lippi's time and our own?

The artists of his time were all ‘great names’ of the Renaissance, but sometimes I wonder if their greatness wasn’t due to their being mentioned by Leon Battista Alberti in his book On Painting (1436). Yes, Brunelleschi, Ghiberti and Donatello deserved fame for their achievements, but they rather overshadow painters of the time more interested in virtue than virtú (excellence), the friar-painters like Lippi and Fra Angelico. I believe we’re in a similar situation today. Although many painters are working in the spiritual tradition, we’re much more likely to hear about art that is controversial.

As you researched Lippi's life in Italy, what site did you find most moving?

The Chapel of the Magi in the Palazzo de’ Medici. It is the most profound place. The Gozzoli frescoes of the Magi are very famous, but I had to imagine the place newly built and not yet decorated. A friend of mine is convinced it’s a ‘chamber of initiation’. All I can say is, I’ve looked hard and cannot disprove her. Even the placing of the chapel as a room within a room – that rather suggests sensory deprivation, like the chamber in the Great Pyramid, but of course, it could just have been designed to cut out street noise! As I write fiction, however, I was free to follow my friend’s idea.

Review of A Gift for the Magus by Linda Proud

See listing for A Gift for the Magus at Amazon.com