HistoricalNovels.info interviews
the author of The Raven's Heart 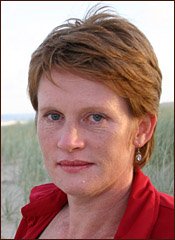 It was a pleasure to have Jesse Blackadder, author of The Raven's Heart, with us on September 11, 2012, to share some surprising background about her novel. The Raven's Heart is about a cross-dressing lady-in-waiting to the young Mary Queen of Scots.

What gave you the idea to write about Mary Queen of Scots?

I discovered that one of my Blackadder ancestors was caught up in the gunpowder plot to murder Lord Darnley, the husband of Mary Queen of Scots. William Blackadder was the first man on the scene after the explosion and was arrested by the Night Watch of Edinburgh. Who really murdered the King has never been proved. The Queen was accused, but Alison Weir’s superbly researched book Mary Queen of Scots and the Murder of Lord Darnley suggests that the plot originated in the highest levels of the nobility. It would be a spoiler to reveal what William’s involvement was, but the explosion is a turning point in The Raven’s Heart.

Your heroine disguises herself as a man. Are there other cases of women who did this in the sixteenth century?

The most famous case was Mary Queen of Scots herself. At first she dressed as a man and slipped out of her palace at night to explore Edinburgh’s streets and drink in its taverns. Her disguise allowed her to join in the life of Edinburgh’s ordinary citizens. However, later Mary began cross-dressing more politically. She turned up in masculine clothing to a banquet in honour of the English ambassador and joked about how a marriage between herself and Elizabeth I would solve their political problems. When one of her powerful lords in the north of Scotland defied her, Mary donned armour to lead her armies to defeat him and admitted that she loved to live as a soldier.

I was also intrigued by a reference to women soldiers that I found during my research. In a 1567 battle between Sweden and Denmark, 1500 Swedes died on the battlefield. When the bodies were retrieved, 500 were found to be women. They had worn their hair knotted under their helmets, their clothes and weapons were the same as the men’s, and they fought with great valour and strength.

Blackadder is such a dashing name! How did your ancestors come by it?

The name comes not from the minds of Ben Elton, Richard Curtis and Rowan Atkinson, who wrote ‘The Blackadder’ series, but from an Old English word ‘awedur’ meaning a running stream. Blackadder Water flows through the village of Allanton in Berwickshire on the Scottish-English border. The Blackadders were granted lands adjoining the river in the 1400s by the King in gratitude for the their ferocity in repelling the English. How they lost the land is retold in The Raven’s Heart.

Review of The Raven's Heart by Jesse Blackadder

See listing for The Raven's Heart at Powell's Books

See listing for The Raven's Heart at Amazon.com