A Gift for the Magus 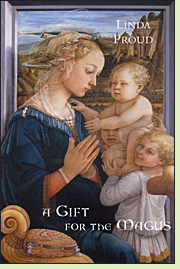 A Gift for the Magus is about a Carmelite friar who describes himself as "the kind of friar that Boccaccio mocked in his tales, the kind that merciless Dante consigned to his circles of hell." Fra Filippo Lippi avoided monasteries, drank and ate prodigiously, could not stay away from women - and painted some of the most beautiful sacred art ever made. His "Madonna and Child" is reproduced on the novel's cover; its serenely beautiful Madonna and the lively angel holding up the Christ Child blend holiness and earthiness so seamlessly, they look almost ready to turn and bless the viewer with very physical hugs. In Lippi's time, artists were only beginning to experiment with painting from life; most thought it would be shocking, even sacrilegious, to paint the Virgin Mary to resemble a specific human. Yet something seems to have persuaded Lippi to use his mistress, Lucrezia, as his model for this painting.

Cosimo de' Medici, the "magus" of the title and grandfather of the magnificent Lorenzo, was Lippi's patron. Cosimo took in the budding philosopher Marsilo Ficino as a child, arranged for him to learn Greek from a scholar who had fled the sack of Constantinople, and finally set him to translating the complete works of Plato from Greek into Latin. This radical and daring move would usher in the Renaissance, but not without controversy. "With too much reading of ancient philosophy," says a more traditional painter-friar, Fra Giovanni, to Cosimo in the novel, "it's easy to cross the invisible line and become pagan in your thinking."

The characters in A Gift for the Magus, their faults and virtues as richly limned as the figures in a Lippi fresco, their portrayals informed by deep and thoughtful research, are the novel's most obvious pleasure, giving it both humor and weight. Balancing that is a freeing lightness of spiritual understanding stemming from Proud's almost instinctive grasp of Platonic philosophy and the fresh air it infused into Renaissance Christianity. (2012; 472 pages, including Author's Notes on the history behind the novel and a list of Main Sources)

More about A Gift for the Magus at Amazon.com

or The Book Depository


Other novels about the Medici and the birth of the Renaissance:

A Tabernacle for the Sun by Linda Proud (1997), #1 in the Botticelli trilogy. See review or more info at The Book Depository

Pallas and the Centaur by Linda Proud (2004), #2 in the Botticelli trilogy. See review or more info at The Book Depository

The Rebirth of Venus by Linda Proud (2008), #3 in the Botticelli trilogy. See review or more info at The Book Depository

Fra Filippo Lippi, a YouTube video about Lippi's "Madonna and Child" with a short written piece about the painting and Lippi's gossip-provoking life.

Back to Novels of the Renaissance